“There’s a reason why stars can only exist in the sky – they’re just rockets of light travelling through space, so it feels right to admire their form from a distance. People, solid and living and breathing together in the same world, are not meant to be surrounded by that much darkness.” 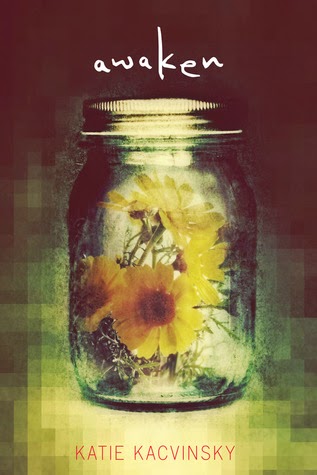 This book is a dystopian novel which allows the reader to imagine what horrors await us in the future. Similarly to The Hunger Games and Divergent series, Kacvinsky envisions a world which is nothing to be desired and paints a unappealing future where technology rules everything we do. Maddie, the protagonist, is a seventeen year old girl who finds using technology as normal as breathing. From waking up in the morning to attending digital school, (of which her father is the creator,) Maddie relies on computers for everything. Face to face interaction between people is almost inexistent and life has become unsurprising and safe. At the beginning of the novel, Maddie’s life seems fairly uneventful. However, as the plot develops, secrets of Maddie’s past are uncovered and streaks of her distant rebellious nature are revealed when she meets Justin, a digital school rebellion, who wants nothing more than to have the past back again.

Kacvinsky successful creates a realistic future that makes the reader reflect on how much humanity relies on technology. She portrays computers and technology as very advanced, but, while the reader is made to see them for their negative impact on society, Kacvinsky doesn’t make it unrealistic with a ‘computers are taking over the world’ plot. I really enjoyed the way the book was written, especially the imagery she used, making the writing even more powerful and profound: “here is life passing, like clouds drifting over the sky, yet they don’t see what’s right in front of them. They believe there is something more substantial going on in that little screen in their hands.”  The book contained a lot of likeable characters. This, with an interesting plot, made for an easy and light read. On the other hand, I thought the plot was a bit predictable in places, especially concerning the relationship between Maddie and Justin, however it was a satisfying and optimistic element to contrast the overall disheartening backdrop of the book.

Predictably there are two more books following Awaken – adding yet another dystopian teen trilogy to the world of literature. Although I mostly enjoyed the novel and am a little interested about what happens next, I am in no hurry to read the others. The plot was simple and I have no urge to continue now. The reason for this is mainly because the book was never gripping enough to make it a page turner, I could easily leave it for a few days. I have to admit though, that unlike other dystopian novels, I thought this one was the most realistic of all, making you wonder what awaits us in a few decades. If this bleak insight is any clue, it doesn’t give much hope for a bright future.

Number of Reviews on Amy’s Bookshelf

A Bibliophile’s Escape in Brighton

We Must Be Brave Book Review